Holly's House opened its doors to begin assisting victims of intimate crimes on September 2, 2008, after more than four years of development. Since opening, we have assisted more than 3,600 child and adult victims in our community. We have also taught our child abuse prevention program to over 40,000 students in more than 600 classrooms. View a timeline of major milestones in our history. 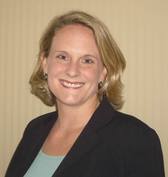 The organization's Board of Directors chose the name Holly’s House™ for the Child and Adult Advocacy Center in honor of the work Holly Dunn Pendleton has done in educating our community on how to assist victims of sexual violence, as well as her personal efforts to reach out and help victims of sexual assault. She served as the organization's Executive Director and Interviewer from 2008-2009.

An Evansville native, she is the only known survivor of the Railroad Serial Killer. Holly has used her traumatic experience to help others heal from, or hopefully avoid, similar situations. She lives as a survivor, not a victim. Holly speaks at schools, women’s events, before judicial panels, and has provided training sessions for the entire Evansville Police Department. Holly was the recipient of the 2006 Jefferson Award for Community Service, sponsored by the Evansville Courier and Press; and one of five honorees of the 2006 Jacqueline Kennedy Onassis Award for Greatest Public Service Benefiting a Community. She also serves on the Evansville-Vanderburgh County Commission on Domestic and Sexual Violence.

For more information on Holly and her work, visit her website!

Detective Brian Turpin served as one of the initial presidents of the Holly’s House Board of Directors. He has been an employee of the Evansville Police Department since 1996 and has been working with the sexual violence unit since 2004.

Detective Turpin was one of the leading forces behind the development of Holly’s House.™ He came up with the original idea of an advocacy center in Evansville after graduating in 2005 from Finding Words Indiana Training. Finding Words is a program that provides child abuse professionals with a comprehensive introduction to a forensic interview process that improves their ability to effectively and reliably interview children about sexual abuse. After attending this program, Detective Turpin began working on the development of what would one day become Holly’s House.

Through his work, countless hours of volunteered time, through the generosity of many people,  and in his words, "by the grace of God," Holly’s House became a reality in September of 2008. As Holly’s House looks towards the future, the advocacy center hopes to serve the Evansville community in a way that positively impacts the lives of many people.